Stephen Harper ends 2009 the same way he began it: on the run

Like most things that happen in Ottawa, this had been predicted.

The rumours of prorogation were rampant weeks ago. That’s when the New Democrats put out this release calling 2009 “Stephen Harper’s Year on the Run”. The clever release contains a few examples - like the PM skipping-out of questioning on detainee abuse to attend an apparently urgent photo-op with lacrosse players - that a lot of observers may have forgotten.

With only a total of 141 House sitting days, the first two sessions of Stephen Harper’s second parliament have been among the shortest in Canada’s history. Indeed, one has to go all the way back to Louis St. Laurent’s 1949 parliament to find two opening sessions of shorter duration.

But unlike St. Laurent, Harper is leading a minority parliament. And in this context, Harper has taken to overusing prorogation the same way sports teams are inclined to use up all of their time outs at the end of a losing period – to regroup and hopefully throw the winning team off their momentum.

The irony of course is that once upon a time, Stephen Harper was an avowed defender of the supremacy of parliament. He doted on every way in which the Liberals had weakened the ability of MPs to effectively represent their constituents. He loathed the concentration of power in the Chretien / Martin PMOs. When Chretien moved to prorogue in 2003, then opposition leader Harper blasted:

"What we are also learning once again is that the Liberals apparently want to prorogue the House … They want to run out of town, get out of town just one step ahead of the sheriff. Is the Liberal government committed to staying here as planned throughout the month of November so that it can be held accountable in the House for its actions?'' - Stephen Harper, Canwest News Service, 20 October 2003

But all of that was before 2006 -- before Harper found himself in the Prime Minister’s chair and transformed himself into a power - and prorogation – addict, just like the Liberal leaders he once loathed.

But as we end 2009, there is some good news. Yesterday, Nanos put out their year end leadership numbers which show a larger number of Canadians are turning to the New Democrats’ Jack Layton. Honest, approachable, and the one leader with experience to work across party lines to get results, 2009 has solidified Layton’s position as the anti-Harper.

The narcissism of small Liberal and Tory differences 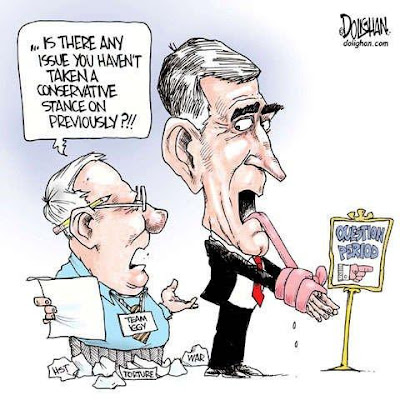 This kind of thing has become sadly predictable. But, reassuringly, not so predictable that it doesn’t merit the criticism it is receiving.

In fairness, let’s first acknowledge that Canadian politics has always been home to its share of baseless and tasteless attacks. But let’s also accept that recent years have also witnessed a spike in both the number and viciousness of childish political attacks – particularly between the Liberal and Conservative teams.

Who can forget these rhetorical high-points? ...

Liberals demand apology for Prime Minister’s slur (Incredibly, Liberals made this their lead in question period for about a week, if memory serves)

So, why has debate between the Liberals and Conservatives become so poisonous that a photo of the PM being gunned down is deemed “okay” by the professional communications staff running the Liberal website?

Consider this: Speaking about student politics at the University of Toronto, the Old Bob Rae once famously opined that “the reason it was so acrimonious and so divisive is because the stakes were just so low.”

In other words, when what you are debating are matters of such small difference – bringing in the HST tomorrow or next week; appointing 17 Senators instead of 18; torture versus “torture-lite” – the tone of the debate becomes the only thing you actually control.

Unlike New Democrats who can put real differences on the table between them and Stephen Harper, Liberals find relief in the ad-hominem. It’s all they have left.
Posted by Blogging Horse at 12:37 PM 4 comments:

If imitation is the fondest form of flattery, then what is the higher virtue in flagrantly ripping-off someone else’s ideas?

The man who haas spent his more productive years chiding hapless undergrads for not properly citing Heidegger ‘s Identität und Differenz has today passed-off as his own a re-tread of the ideas New Democrats have been pushing for months -- if not years.

But rather than throwing Harvard’s plagiarism policy at him, New Dems are instead having a bit of fun at Ignatieff and his top staffer Peter Donolo …

Where were these 28 Liberal MPs?

So this afternoon, Liberal MPs voted with the Harper Conservatives to pass the first stage of their unpopular HST legislation.

And while New Democrats could be counted on to oppose new higher sales taxes on BC and Ontario families, 28 Liberals failed to show up at all!

They didn’t vote with Michael Ignatieff in favour of higher taxes. But they also didn’t defy their leader to vote with up with New Democrats against the tax hike either.

These Liberal MPs - including 16 from BC and Ontario just didn’t show at all. If they don’t believe Ignatieff is right on the HST, shouldn’t they say so? And if so, shouldn’t they vote against it?

Never one to miss a chance to appeal to his well-connected friends, Michael Ignatieff announced yesterday that he will be backing Harper’s sales tax shift in Ontario and BC.

Liberal MPs from those two provinces are already greeting the news that they will be voting for higher taxes with predictable enthusiasm.

They are right to be worried. Consider that in the last election Liberals lost 16 MPs from Ontario and 4 MPs from British Columbia just for considering a tax hike. Imagine what it will cost them when they actually help Harper / McGuinty and Campbell bring this tax hike in!

But don't worry! Dalton McGuinty is here to help. In exchange for Liberals offering up their 38 Ontario seats and five BC seats to the New Democrats, McGuinty’s crack communications team has offered panicked Liberal MPs these 14 irrefutably lame talking points:

There, that ought to do it.

14 Irrefutable Facts on the HST

1. We are implementing the largest tax cut package in Ontario history.
2. We are cutting income taxes for 93% of Ontarians starting January 1.
3. 90,000 low income Ontarians will be removed from the tax rolls on January 1.
4. We are cutting taxes for businesses to make them stronger, especially in the manufacturing sector, so they create jobs.
5. These tax reforms will actually cost the government money. $3.4 billion in the first four years alone. The HST is not a "tax grab." Individuals who refer to the HST as a “tax grab” are either playing political games, are uninformed, or they are insulting your intelligence.
6. 130 other jurisdictions have a single sales tax (value-added tax)and none of them have ever reversed it, including the NDP in Nova Scotia.
7. In the Maritimes, they saw a 12% increase in business investment after they brought in the HST.
8. Economists on both the right and left support our tax reforms.
9. Poverty groups and business groups support our tax reforms.
10. The Institute on Ontarios Competitiveness and Prosperity supports our tax reforms.
11. The Conservatives supported the HST just 7 months ago.
12. The Conservatives and NDP do not have a plan to turn the economy around and create jobs.
13. We have a plan that experts say will create 600,000 new jobs.
14. The opposition wont commit to undoing a single tax change in our package.

Posted by Blogging Horse at 10:05 AM No comments:

This Horse is in the Running

The worst kind of blogging is blogging that is about blogging.

The very first post here way back set out that there would be none of that in this lonely corner of the internet. There's just too much else going on in the wacky and deadly-serious world of Canadian politics to get all self-referential and navel-relevant.

That said, excuse this tiny exception. Seems some nice soul has nominated BaDH for a Canadian Blog Awards '09, along with some other amazing blogs.

Now back to regular non-blogging blogging.
Posted by Blogging Horse at 10:15 PM 2 comments: