Stephen Harper’s decision to break his word and appoint the largest number of unelected Senators in history has made him unpopular everywhere – even in the Conservative heartland of Calgary.

Since it began, Harper has shown an incredible inability to relate to people’s fears about the economic downturn.

And like a reflex born of his discomfort having to hear ordinary folks bleating about their own insecurities, Harper’s reaction has been to retreat deeper into the comfort of his own parochial partisanship. Witness the now-infamous Economic Statement which addressed a sinking auto sector head-on by attacking unions, women and his political opponents.

It’s this exact same partisan impulse which allowed Harper to break his word to never appoint unelected Senators by appointing an obscene 18 of them at the cost of $6 million in the first year.
But people in his hometown of Calgary “get” Harper. Even though he wasn’t born here, the movement that sent him to Ottawa was. Like kindred spirits born of the seemingly-unending oil boom and mountain air, they understand him. Nowhere more so than at the Saddledome – the great hockey shrine, where might makes right and winning is what matters most.

So it’s no small surprise that Harper's visit at the December 23rd game against Anaheim was greeted with booing. Sources tell Canada’s Number One Equine-Themed Politics Blog that a large number in the crowd were visably – and audibly – in an un-Christmasy mood towards Harper and his day-old Senate flip-flop.

As we approach the season of resolution and renewal, Conservatives need to ask themselves if Stephen Harper really is the best they have to offer Canadians.

Because Nova Scotians are already there.
Posted by Blogging Horse at 10:37 AM 2 comments:

When he was running for the leadership of the party in whose name he just appointed a historic 18 unelected, unaccountable and undemocratic Senators, Stephen Harper said:

“I will not name appointed people to the Senate. Anyone who sits in the Parliament of Canada must be elected by the people they represent.”

Of course, this appalling reversal - on the very same day he appoints a judge to the Supreme Court with no committee vetting process as he had so often promised in the past - is how Stephen Harper ends his worst year since becoming Prime Minister.

But it's not Harper’s worst year just because of his election which failed to produce a majority and the promised ‘big Quebec breakthrough’.

It’s not his worst year just because the great economist has missed all the cues of a historic recession.

It's not even his worst year just because a fractured opposition has been forced into unity against him.

It's been Stephen Harper's worst year simply because he waited until 2008 to make all of his worst mistakes. He called a snap election at the wrong time, breaking his own fixed election law.

After kissing up to Quebecers for years he betrayed his tin-ear to the province with far-right politics like attacking cultural industries and a heavy-handed plan to lock up 14 year olds.

He promised cooperation with the opposition and to make the economy job one but instead tabled a Economic Statement which economists called a farce.

He hypocritically called the opposition parties "undemocratic" for planning to replace his government when he had made the exact same plans four years earlier.

And now in spite of his March 2004 promise to "not name appointed people to the Senate" he has done just that: appointing 18 to jobs-for-life on the $95 million gravy train.

When you stop taking the things you say seriously it’s usually a good sign that others should think to do the same.

In 2009, Conservatives should take a good hard look in the mirror and ask themselves if Stephen Harper really is the best they have to offer Canada.
Posted by Blogging Horse at 4:50 PM 2 comments:

"Past Steve is coming back to kill future Steve!!"

On November 28, 2008 at approximately 4:30pm Eastern, Stephen Harper finally became everything he used to hate ...

“Pushing a corpse from a speeding vehicle”

As today’s events in Illinois show - or the more local example of Conservatives raising the ethical bar by fraudulently recording and broadcasting a confidential caucus meeting - politics sometimes attracts the wrong kinds of people.

So when Liberal leader Stephane Dion announced his hastened departure from Stornaway yesterday, it was nice to see these incredibly kind words from New Democrat leader Jack Layton.

Layton’s words are all the more generous given the non-reaction Dion’s announcement elicited from others. Somewhere between “see ya, ‘round” to dead silence was offered up in memory of the Liberal leader - including from Liberals who were said to be 100% behind their leader last week.

As Bruce Cheadle wryly put it: “On Monday, NDP Leader Jack Layton distributed a glowing tribute to the departing Dion that made Liberal send-offs, by comparison, appear as perfunctory as pushing a corpse from a speeding vehicle.”

The headline that says it all ...

Just how valid is Harper's claim that changing governments without a new election would be undemocratic?

"It's politics, it's pure rhetoric," said Ned Franks, a retired Queen's University expert on parliamentary affairs. "Everything that's been happening [concerning the NDP-Liberal coalition] is both legal and constitutional."

Other scholars are virtually unanimous in their agreement. They say Harper's populist theory of democracy is more suited to a U.S.-style presidential system, in which voters cast ballots directly for a national leader, than it is to Canadian parliamentary democracy.

"He's appealing to people who learned their civics from American television," said Henry Jacek, a political scientist at McMaster University.

That said, one lesson we can learn from our American cousins in recent years is to beware of those at the heights of power who deliberately mislead ordinary people in order to expand that power.
Posted by Blogging Horse at 10:17 PM 2 comments:

Stephen Harper is unworthy to be Prime Minister

Presume for a moment that the Governor General agrees to Stephen Harper’s request to prorogue the House of Commons this morning.

If Stephen Harper continues as Prime Minister and continues trying “to make parliament work” in the adversarial and rabidly partisan fashion to which he is accustomed (everything we know about his character tells us he will) what prevents us from coming back to this precise moment weeks or months from now?

As Conservative MP Laurie Hawn conceded this morning on CBC Radio, "I will admit that there were things in the economic statement that were needlessly provocative."

Unfortunately it’s as easy for Conservatives to repent right now for this cataclysmic misjudgement as it is to seize the opportunity to do the exact same thing when the mood next strikes them.

Meaning that as long as Stephen Harper is in the Prime Minister’s office every economic statement, every budget, every throne speech and every vote of confidence will become another occasion to blackmail concessions from the opposition.

This is a moment in history to leave the politics at the door and yet Stephen Harper is a man overburdened with wiretapping, mean-spiritedness, regional divisiveness and deliberate misrepresentation in the disreputable name of parochial partisanship.

Stephen Harper has proven himself unworthy to be Prime Minister.
Posted by Blogging Horse at 10:11 AM 2 comments:

Serious words from a serious statesman. Broadbent calls Conservatives out for lying to Canadians

Proving it can be done, Ed Broadbent lowered the temperature but raised the debate.

Speaking today on CBC Newsworld, Broadbent leveled the harshest criticism against Harper yet over the crisis that he's created: "I'm concerned that I have a Prime Minister who lies to the people of Canada and he knows it. It's one thing to exaggerate. It's another to tell deliberately tell falsehoods."

Serious words from a serious statesman.

Posted by Blogging Horse at 4:50 PM No comments:

Harper stoops to telling the West one thing and Quebec another

In their desperate attempt to obfuscate and fabricate about the NDP-Liberal coalition's accord, the Tories have the divided the country by telling Westerners one thing and Quebecers another when it comes to the Bloc's role in the coaltion.

"And - at least in English - the Conservatives repeatedly stated that the Bloc will have a "veto" over every policy of the new coalition. In French, however, Public Works Minister Christian Paradis cited a Liberal MP to claim that "the leader of the Bloc has signed a blank cheque and given away his independence."

In reality the Bloc has agreed to support the coalition's legislative agenda for 18 months under the accord - neither initiating or supporting motions of non-confidence - a much more secure arrangement in fact than the bill-by-bill basis upon which Harper has bought the support of Bloc MPs over the years.
Posted by Blogging Horse at 10:35 AM No comments:

"Working with the Bloc is wrong (when others do it)": Harper

If you are exhausted by the Conservatives' canned outrage and canned red herring towards anyone who would "work with the separatists", you aren't alone.

Hat tip to the Montreal Gazette's Elizabeth Thompson for ending Harper's latest vacation from reality with this.

That's right, it's SO utterly heinous to rely on the support of the duly elected Bloc MPs in Ottawa to get your agenda through that Conservatives could barely bring themselves to brag about how often they relied on the Bloc’s support in the last election.

Fact: the Bloc is not part of the coalition. They are merely supporting it. How is that any different than each and every time the Conservatives needed the Bloc to get their legislation passed?

It's not.
Posted by Blogging Horse at 7:34 PM No comments:

The leg Stephen Harper doesn't have to stand on

Under the Canadian system, the government needs the support of at least 50 percent of the House of Commons to govern. The Harper Conservatives lost that support when they tabled their empty and juvenile economic statement in the midst of the worst economic downturn since the 1980s.

Under our system, when a party fails to keep the support of 50 percent of the House of Commons, it falls to another party or parties to make the case that they can.

So despite all of his high dudgeon about “a backroom deal to overturn the results of the last election” and “they don’t have the right to take power without an election” Stephen Harper understands all of this full well.

Just as he did when he wrote to the Governor General asking her to consider his coalition of the “socialists and separatists” in the first 73 days of the Paul Martin minority government in 2004: 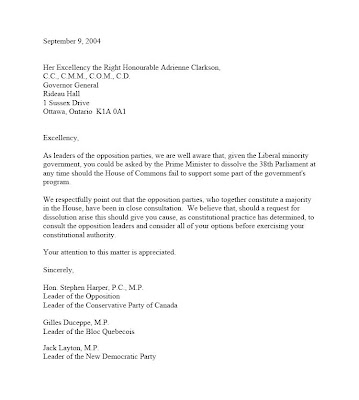 So, why does Stephen Harper call it wrong when others do the exact same thing he did 4 years ago?
Posted by Blogging Horse at 10:47 AM No comments: