If one entertains the view of the Conservative Party / Bay Street establishment and their acolytes in the Fraser and CD Howe Institutes - as well as their new branch plant in the Dion Liberals - the knock against the New Democrats' platform is that Layton's proposal to return corporate rates of tax to where they were only last year is tantamount to shutting down the economy (proving there is sometimes more overacting among the economic right than in a grade 7 production of "Our Town").

So it's a good thing that Erin Weir over at Progressive Economics Forum has written this. In a phrase: "corporate taxes are but one of many factors that influence competitiveness."

Weir is absolutely right of course. Massive corporate giveaways since 2000 have given us the economy we have now: losing jobs, and delivering virtually zero wage growth. It hasn't worked in the US either. So Jack Layton is right -- if participating in a rush to the bottom on corporate taxes hasn't gotten us what we want yet, why keep doing it?
Posted by Blogging Horse at 9:25 PM 2 comments:

If people are "dying to vote Liberal", then why today's panic event in Toronto?

Since the beginning of thre campaign, Jack Layton has been holding Saturday rallies in big cities. The televised rally from Vancouver yesterday was by far the biggest and best so far. The visuals were great with candidates and supporters all around energetically waving “Jack Layton - Strong Leader” signs. For his part, Layton looked relaxed and in his element after spending most of that week fighting Harper in BC where the two leaders are neck and neck.

On the other side, there is Stephane Dion, whose campaign frantically tacked on an event in Toronto to their normally low-activity campaign Sundays … that’s right, TORONTO - the city that has been giant red blob on virtually ever elections map since 1993. As CTV’s Graham Richardson reported yesterday:

Jacqueline: With more on why the Libs are "not" taking the day off -- I’m joined by CTV’s Graham Richardson. So Graham, the Liberals have usually been taking Sundays off. Why this event in Toronto tomorrow, all of a sudden? Is it because of what’s happened in the polls?

Graham: [Dion’s campaign] is very different from what you just heard from Jack Layton and different from what Stephen Harper does, gathering partisans around him as a show of force and support. We saw a bit of it last night in London, but generally we're not seeing a lot of that at all. The question is where are the Liberals? Where are they going if they are not coming here? This is the big story in the election campaign. If that Liberal vote is collapsing, where is it going and who is going to get it?

Jacqueline: Based on the latest polls it appears that the NDP are based to form the official opposition based on what we see right now, doesn't it?

Graham: Polls can change and if that happens it would be extraordinary, if Mr. Layton ends up in that seat. We're a long way from that. Clearly if momentum and surges are to be measured, it is not on this bus. Mr. Dion says that people are dying to vote Liberal, he is ignoring polls and he has scrambled to add a Toronto event to shore up what should be the safest place for Liberals in the country, this in Toronto.

Sure, with two whole weeks left to go there is a lot that can happen in the campiaign. But Liberals have cause to be wary. The last time Dion was lagging in the polls, the sollution he came up with was his carbon tax.
Posted by Blogging Horse at 8:10 AM 1 comment:

Readers of the Toronto Star will be surprised to wake this Saturday morning to read that - for the first time in recent history - the New Democrats are now in second place running right behind the Conservatives in this election.

The Angus Reid poll commissioned by the Star found not only that Jack Layton's party is picking up support across the country, but also, as the polling firm's Mario Canseco says, "as the campaign progresses, Layton is really gaining and seen as a much more interesting leader while Dion is struggling badly."

If this trend holds, the election will change fundamentally. Harper will increase his attacks on Layton - even more than what we saw in BC this week. And individual Liberals will continue to distance themselves from Dion, as MPs shift to run essentailly 90 by-elections just to keep the seats they have.

For his part, Layton should continue to make his pitch that is clearly working: Canadians who want real change, and not more of Harper's agenda, should vote for a strong leader and a strong team of New Democrats to deliver that change.
Posted by Blogging Horse at 7:25 AM 1 comment:

The plane the Liberals managed to secure at the last minute for this election - in spite of more than two election scares in recent years - has become something of a metaphor for the campaign Dion is running, or less charitably, the party itself.

So, it's serendipitous timing that that particular Boeing 737 (serial number 21928 LN:603) currently sitting in a garage in Montreal should have had it’s maiden flight today … 29 years ago

Showing they can put common courtesy ahead of politics, the New Democrats have offered this birthday card for the plane which first took to the skies this day in 1979 … when Stephane Dion was only 24 years old.
Posted by Blogging Horse at 10:52 AM No comments:

The old strong and the new dumb

This is a no-brainer: minister makes idiotic wisecracks in the midst of a health crisis he has seemed insensitive to from the start.

Ritz has to go -- if only to restore any sense that Harper has the chops to run a lunch counter, let alone a $260 billion operation like, oh, the Government of Canada.

But that's not how the new dumb and the old strong see it.
Posted by Blogging Horse at 10:52 AM No comments:

Week two of the campaign begins very differently than week one, with the Harperites having decided Jack Layton’s New Democrats are the bigger threat to their re-election than the moribund Dion.

Layton is “beginning to challenge the Liberals as our primary opponent in a number of key areas," a senior Conservative campaign source said Sunday. "Not just during the campaign but in the lead-up to the campaign, the NDP has played the role of the principal opposition to the government while the Liberals were abstaining from votes and retreated in a number of issues, the NDP were standing firm and opposing the government vigorously."

Having the Conservatives focusing more and more on Layton’s growth and potential to grow is a significant game changer for the campaign. While Liberals will welcome not having to defend Dion’s carbon tax from both the governing party as well as from voters, they should worry about beginning to be forgotten so early in the campaign.
Posted by Blogging Horse at 6:13 AM 1 comment:

Polls are polls and a saavy politician knows not to talk about polls.

But you have to think Jack Layton and NDP candidates must be sorely tempted to talk about this one, which shows for the first time since Dion became leader, the NDP statistically tied for second place right behind Harper.

Fortunately, journalists have no inhibitions about musing on the latest polls, like Mike Duffy did on his show yesterday: "[The] Angus Reid national poll shows the Liberals and the NDP basically tied. Are we seeing a battle shaping up here between Stephane Dion, the wounded leader of the Liberals who has been under attack from even within his own party and the NDP, as to who is going to be the alternative government?"
Posted by Blogging Horse at 5:56 AM 16 comments:

… first up, pollster Darrell Bricker who offers this analysis of all the leaders pros and cons today.

To Layton, who is running with both guns a-blazing against Stephen Harper, Bricker confirms that New Democrats are in the right place to pick up support from fromer Liberal voters in Quebec in this election.

In the last paragraph, he offers his free strategic advice:

So Layton should be in Montreal a lot, courting not only francophones but anglophones and allophones as well, he added.

And "he should be going after Liberal voters, not Stephen Harper."

Do you think it’s easy to put up a website? 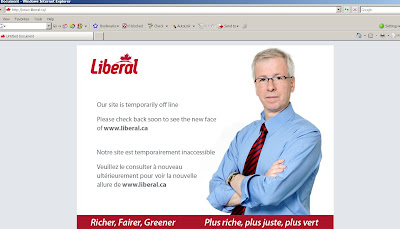 Meanwhile, over at Jack Layton's site ...
Posted by Blogging Horse at 7:10 AM 4 comments:

An interesting bit on the New Democrats' strategy today in the Star:

Jack Layton is ready to talk about all kinds of campaign issues, from affordable medication to smog, but one topic he didn't mention yesterday was Opposition Leader Stéphane Dion.

"If you apply for a job, you don't normally talk about the other applicants," the New Democratic Party leader said yesterday, when asked why he had delivered an entire campaign-style speech without once saying the Liberal leader's name or bringing up his carbon tax.

It will be recalled, of course, that in the last election while they were crusing to their own defeat, Liberals bleated that the NDP was attacking them, not the Conservatives (imagine: criticizing a party for its record in office!). It's a line they have continued to stretch beyond its credibility ever since.

By taking dead aim at Harper, Layton is showing himself the real Harper-fighter as well as denying Liberals someone else to blame for their eventual flame-out when it comes.
Posted by Blogging Horse at 6:50 AM 12 comments: