It’s no secret that the Liberals are hurting for cash. Their most recent fundraising report filed with Elections Canada was the worst ever for the Liberal Party. In the first three months of 2007, the Liberals took in only $530,000 – $4.6 million less than the Conservatives and over $700,000 less than the New Democrats.

Compared to the same period in 2006, donors were 34% fewer and donations were 60% less. This, combined with polls showing Dion roughly as popular as Pepsi Blue, is leaving some to say that if the Liberal Party was a stock, the order would be “SELL, SELL, SELL”!
Which brings us to this latest fundraising letter that has been circulating from Dion . . . 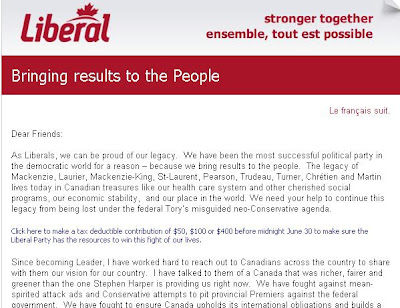 Leaving aside its dubious accuracy given how little Liberal MPs have done in the House of Commons, the slogan “Bringing results to the People” is pretty much dripping with condescension.

“The People”? Take careful note of the capitalization. Try to miss the elitism; the well constructed stratas that put them there and the rest here; the overriding sense that announces with no apology, “we’re the Liberal Party of Canada and you’re, well, not.”
They are also proud that they "brought" the "results" to the people . . . not "delivered" or "got" but “brought” – as though bequeathed from on high.
That’s right Canada (for no rational reason whatsoever) the arrogance is back!

Yet another Liberal joins the Harper Conservatives

And with this, the third MP to have . . .
a) been elected as a Liberal only 18 months ago;
b) campaigned on a platform to vociferously oppose the right-wing agenda of Stephen Harper; and
c) campaigned with a leader who said the Liberals shared the same values as the NDP . . .
. . . leaves Doomsday Dion to join Harper and the Conservative Party of Canada.
First, Emerson, then Khan, and now Comuzzi. The Liberal Party has become the feeder league of the Conservatives.
The old eye-roller that "you have to vote Liberal to stop the Conservatives" has become as laughable as Paris Hilton's rehabilitation.
Lonely but not powerless are Harper Liberals who remain, like Maurizio Bevilacqua, Albina Guarnieri, Derek Lee, John Maloney, Joe McGuire, John MacKay, Paul Szabo, Paul Steckle and Paul Zed to keep the blue hope alive on the red benches.
Posted by Blogging Horse at 6:03 PM 4 comments:

Yesterday, NDP MPs Nathan Cullen and Judy Wasylycia-Leis held a press conference to sum up the session that was.

But it wasn't a typical partisan press conference with bluster and charges based on one or two instances of incompetence by the other parties – they had actually done their homework. They presented a thorough analysis of the session looking at votes and bills and questions to the government.

Their findings in a nut-shell: each NDP MP is doing the work of 9 Liberal MPs and 18 Bloc MPs.

Check out the graphics: 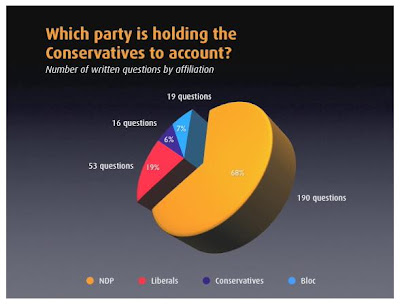 - The Liberals are 55% of the opposition benches but have submitted less than a third of the private members bills. (So, where are all these great ideas Dion says Liberals have?)

- Gilles Duceppe has voted with Harper nearly half of the time; while Layton has voted against Harper over 65%.

- Liberal MPs have the worst record for attending votes of any party with 16 MPs missing on average. (If an MP does nothing else, shouldn't he or she be expected to vote?)

Bottom-line: The NDP is the workhorse in the House of Commons. And with by-elections coming this summer, working Canadians are right to wonder why they should reward Liberal and Bloc MPs who sit idle in Ottawa.
Posted by Blogging Horse at 8:58 AM No comments:

Non-Facebookers might be confused by this statement, but: "Jack's Wish" just broke into the Top Ten!

Now for the decoder ring: The CBC (honestly, Santa doesn't make as many lists as these people!) has been working the streets of the Facebook world to encourage Canadians to make and vote for wishes great and small for the country.

As of today, Jack's wish for a Canada where no one must choose between paying rent and their medication broke into the top 10.

So it's a happy coincidence that the latest poll from Angus Reid Strategies shows that Canadians rank Jack Layton and the NDP tops on honesty and ethics, as well as the party that most cares about the environment.

The surprising finding that 50% of Quebecers (the highest of any province) think Layton would make a good Prime Minister is particularly timely given the three by-elections in Quebec to come this summer.

WEDNESDAY UPDATE: AR asked Canadians the same questions about the Liberal Party and found that 64% don't think Liberals are either ethical or environmental. Most astonishing is that a majority of people in every region disagree with the statement "Dion would make a good Prime Minister.
Posted by Blogging Horse at 3:06 PM 1 comment:

Several months after the fact, Liberal stalwarts in Central Nova are still fuming over Dion’s deal to not run a candidate against Peter MacKay.

This, of course, was bound to happen.

Dion’s backroom deal with the Liberal-spokesperson-who-runs-the-Green-Party (LSRGP) was poorly thought-out from the get-go. It puts the Liberals in the position of having to (a) admit that they need to borrow the credibility of another party on environmental issues; (b) explain why they aren’t fighting Harper in every riding; (c) explain why if defeating Harper is so important to them, they don’t concede other ridings that are already held by the NDP and Bloc.

The new wrinkle in all this is that local Liberals know MacKay is weak and are fuming that they don't have a dog in the fight. Because as weak as the Conservative machine is after Harper dumped his promise to respect the Atlantic Accord, the LSRGP is even weaker with the former Green candidate today admitting “I don't think May has a prayer . . .”

Dion’s weakness and Harper’s broken trust have soured them with their local supporters. All this, plus the strong second place showing in 2006 is putting added emphasis on the fact that the NDP and Louise Lorifice will be the force for fairness against Peter MacKay.
Posted by Blogging Horse at 9:57 AM 9 comments:

Liberals show climate change furor is all about image

In their latest e-newsletter, the Liberals are once again reaching to convince their few remaining paid-up supporters that they are serious about the threat of climate change.

To put as fine a point as possible on their seriousness, their newsletter includes an image of a smog-grey sky, and in the foreground . . . wait for it . . . that's right, a nuclear station's cooling tower!

While there are plenty of raps against nuclear power, contributing to climate change isn't one them.

When it comes to fighting climate change, it's all about image with the Liberal Party. 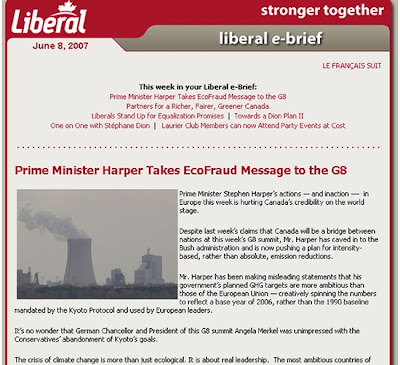 A good measure of the waning relevance of a political party is how often it reverses itself on major issues and whether it even registers with the public when it does.

That their latest flip-flop on extending the mission Afghanistan got this apathetic coverage demonstrates that Dion and Friends still have a couple of nickels left in their credibility change purse.

Only a month ago, Liberals were setting themselves alight because not every party supported their motion to keep Canadian troops in Afghanistan until 2009. They said anyone who didn’t support them was giving Harper a blank cheque to extend the war past 2009.

So imagine the deafening sound of jaws-hitting-earth to see them inching back to the Ignatieff position of "We should stay there until we get the job done and return with honour."
This is what -- the fifth iteration of the Liberal position on Afghanistan? Or is anyone still keeping track?
Posted by Blogging Horse at 9:33 AM 3 comments:

As a quick update I wanted to let you know that the Motion on preventing bulk water exports that was brought to the House of Commons as a result of the NDP hearings on deep integration at the Standing Committee on International Trade passed last night in Parliament by a vote of 134 to 108, with all Conservatives voting against and with a couple of dozen Liberal MPs either absent or abstaining. All New Democrats voted in favour of this motion.

Not to distract from the NDP's accomplishment, but that last part about Liberals being "absent or abstaining" is interesting. Turns out that 44 Liberal MPs are recorded as being absent for the vote. That's nearly half of their caucus!

Sure, there are a lot of demands on an MP's time but in a minority parliament, one or two missing MPs can be the difference between our water staying in Canada or being exported to Malaysia to be turned into that weird goo inside a Magic 8 Ball. Come on, the vote was an HOUR before the hockey game started!