What has happened to put Ujjal Dosanjh on the outs with the federal Liberals?

Over at the Globe, Rod Mickleburgh asks the question: "What has happened to put Ujjal Dosanjh on the outs with the federal Liberals?"

From this corner, a modest suggestion for an answer can be distilled from this video from election night:

Dosanjh's strident "I'm not supporting this government on any issue whatsoever" outburst was born of the frustration all Liberal candidates felt having to explain for 36 days in the election why they kept Harper in power through 43 confidence votes under Dion. (Incidentally, that they were being “reasonable and constructive” while Harper was politicising immigration and cutting culture funding is the best they came up with).

Never a believer in cooperating with the New Democrats in a stable coalition government, Ignatieff has known for some time that he would have to resume Mr Dion’s posture.

Under those circumstances, it would be politically untenable for Ignatieff to promote a man who serves as an embodied reminder that far from being a progressive opposition, the Liberals have sunk back into the role of playing a hapless Robin to Stephen Harper’s Batman.
Posted by Blogging Horse at 5:54 PM No comments:

Ignatieff fails the first test of his leadership

But by walking away from the historic Liberal-NDP coalition today, Ignatieff is perversely showing confidence in Harper. The same Stephen Harper who played political games, shut down Parliament and broke a key promise on the Senate in the midst of a recession.

At the same time, Ignatieff is showing non-confidence in himself to be Prime Minister in these tough times.

Ignatieff has failed the very first test of his leadership.

Liberals will say "we can just defeat Harper later." True, but the Coalition option will be gone, and an election will be the only other option -- an election that the Liberal Party doesn't have the money or organization to fight. In sum: Ignatieff has saddled Canadians with a Harper government for years to come.

Michael Ignatieff, the first Leader of the Liberal Party who didn't want to be Prime Minister.
Posted by Blogging Horse at 11:53 AM 7 comments:

The Liberal Party as you've only very recently seen it before. 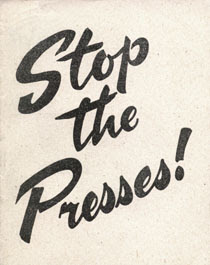 The great Iggy transformation of the Liberal Party is underway!

So it's a touch odd that today's missive "Liberal Leader announces parliamentary appointments" from the Red Bunker seems eerily similar to this similarly titled press-stopper of only three months ago.
Posted by Blogging Horse at 4:59 PM 1 comment:

On a bitterly cold night in Paris this week, a small group of current and former world leaders sat down in the the French prime minister's residence for supper with a hand-picked selection of Nobel laureates.

Seated in the opulent splendour of Matignon house alongside guests including Germany's Angela Merkel, the German chancellor, and Tony Blair, the former British prime minister, was a sole Canadian who had received a personal invitation from the host, French President Nicolas Sarkozy.

... who's that turning heads among the European political and business leaders as they strategize over the appropriate response to the global recession?

If Mulcair and NDP ideas can impress and be welcomed by leaders of international finance abroad, maybe, just maybe it's about time detractors at home finally ejected their outmoded stereotypes about about the New Democrats.
Posted by Blogging Horse at 4:19 PM 1 comment:

Fix the economy, get rid of Harper

Over brie and Courvoisier this holiday season Conservatives have had plenty of time to figure out what they need to do to rehabilitate their party after the November 2008 Economic Statement debacle.

The obvious conclusion for all – save those few hopeless ideologues who still cling to the myth of Stephen Harper’s strategic mastery despite all evidence to the contrary – is that Harper himself must go.

Those needing further convincing that keeping Harper around will hurt more than the alternative consider this: On the very same day that economists are predicting we are now a toboggan run of job loses without even a set of black plastic handles to slow our descent, the only news out of Stephen Harper’s interview with Maclean's is that he’s still fixated on the political party allowances that landed him in the non-confidence penalty box in the first place.

In answer to the question have you “mishandled your relations with the opposition?” Harper incredibly tells Peter Whyte: “the government has decided to go [with] a freeze instead of an elimination. But make no mistake, the government believes that the elimination of these subsidies has to be done eventually, that that’s in the public interest.”

Harper is supposed to be saving a $1.2 trillion economy from collapse. He’s supposed to be managing a $250 billion federal budget. He’s supposed to be doing his part as a leader of a G-8 global economy to restore the confidence of investors and consumers. Instead he’s still obsessing over $20 million worth of political subsidies that are so gosh-darn important they merited ZERO mention in the Conservatives’ election platform. $20 million in political allowances that are dwarfed by the $95 million we are forced so spend on the Senate Harper said he wouldn’t appoint anyone to, but then did.

The issue here is not about political party allowances, nor should it be. The issue now is whether Stephen Harper possesses the self-discipline required of a Prime Minister in a minority government during a calamitous economic downturn. Based on Harper’s narcissistic obsession with partisanship in these times, the answer comes back resoundly “no”.

In a manner unseen since the disastrous bumbling of Stockwell Day at the head of the Alliance, Stephen Harper has climbed high, overplayed his hand, and crashed all the while using his party’s credibility on the economy, democracy and public accountability to break his fall.

Jack Layton and the coalition’s answer is simple: we have to fix the economy and get rid of Harper. You can’t have one without the other.

Harper must go. Even Conservatives must realize that his position is too compromised now.

Which leads to an interesting possibility: before the coalition has its first chance to get their hands on Harper, will more sober and statesmen-like Conservatives like Jim Prentice and Rob Nicholson step forward to call for the change in the leadership their party and our economy needs?
Posted by Blogging Horse at 1:40 PM 2 comments:

There are people who are just going to see the world the way they want regardless of the facts.

Enter Robert Silver and the blog he appears to share with Tim Powers (imagine what that apartment must look like).

In it today, Silver transitions from the obvious to the absurd all the while missing the fact that the party of Tommy Douglas is larger, more confident, and more prepared to govern than it has been in a generation; with almost all of the credit going to Jack Layton.

First the obvious: Silver writes “Whether the coalition is dead or alive is fully and entirely outside the NDP's control. If Michael Ignatieff wants it to happen, it happens. If he doesn't, it's dead.”

That's right. Of course it's right. Without Ignatieff and his 76 Liberals, there is no coalition. But Silver has missed the point. The New Democrats don't need to be in control of what Ignatieff does next. All that matters is that Mr Ignatieff has a choice: he can either demonstrate a desire to work with the NDP on an agenda to stimulate the economy that all Liberals have endorsed, or he can, as Mr Dion did with the Afghanistan vote, hold his nose and give an un-trustworthy Stephen Harper yet another blank cheque while bidding adios to progress on child care, EI reform and working with Obama on climate change. The decision is Mr Ignatieff's. But it's a mistake to believe the decision is politically valueless and that the New Democrats don't know that as well.

Secondly, there is the absurd. In the face of the facts, Silver argues that the New Democrats “failed in the last campaign” and are the same party they were in 1970s.

The same as encountering a misguided soul at the bus station who emphatically insists that Elvis and Marilyn Monroe staged the moon landing on a soundstage outside of Des Moines, this kind of rubbish can only be countered with the facts:

The 2008 election produced the second largest New Democrat Caucus in history -- including the largest Ontario caucus ever (not bad for a leader who will celebrate only six years on the job this month).

In the same election, Layton managed to engineer breakthroughs in Quebec, Newfoundland and Labrador, and the Conservative bastion of Alberta while virtually sweeping Northern Ontario.

The party has increased its seats in every election since Layton became leader and in the Commons has rewritten the 2005 budget to make key investments that are building affordable housing and putting buses on the roads right now.

And as the willingness of Liberals to agree to the coalition policy agreement shows, Layton's NDP understands the modern economy better than any “tax cuts will save us all” Liberal or Tory government ever has.

Layton's (latest) accomplishment has been the unprecedented coalition agreement reached with Mr Dion with the tacit support of Bloc MPs – a feat considered impossible by Ottawa insiders. No New Democrat leader has come this close to producing a stronger economy or fundamentally changing the culture of Ottawa before. As a result, Layton is in the strongest position among his party and Canadians who want change.

But don't try to tell the professional detractors of the Jack Layton NDP any of this.
Posted by Blogging Horse at 10:38 PM 5 comments:

For most of the fall and even after Harper pad-locked Parliament, Conservatives vowed against a return to structural deficits.

On this point the Conservatives would find little disagreement -- at least among New Democrats. Budgeting over the long term to spend more than you take in isn't smart for households, businesses or governments (incidentally, a point Jack Layton has been living and saying long before he was elected leader of the New Democrats).

Yet while the Tories have talked the talk, they are walking the walk right back into the kinds of structural deficits we saw over the 1980s and early 1990s. What Flaherty is musing about today is code for hobbling the federal treasury for years to come. More permanent tax cuts is precisely a recipe for a return to year-over-year deficits. In the post-Economic Statement-era, is it now too much to ask that the Conservatives at least be honest about that?

If Stephen Harper and Jim Flaherty were honest, they would be reexamining the scheduled corporate tax cuts for 2010, 2011 and 2012, given what little those cuts have done to help forestall the current economic downturn. After all, what good is a tax cut to GM, or the larger economy, when the company isn't making a cent to be taxed?

Though if they were honest, Harper and Flaherty would have to admit that their predisposition towards larger and larger tax cuts has more to do with parochial ideology and constraining the federal government to provide infrastucture investment or child care than either with economic stimulus or preventing a return to deficits.

If nothing else, Flaherty's tax cut musings make the point that the Conservatives have learned little since the near-death experience of the Economic Statement. Because budget making through ideological lens has done so much to create jobs and secure their precarious position so far.
Posted by Blogging Horse at 12:36 AM No comments: